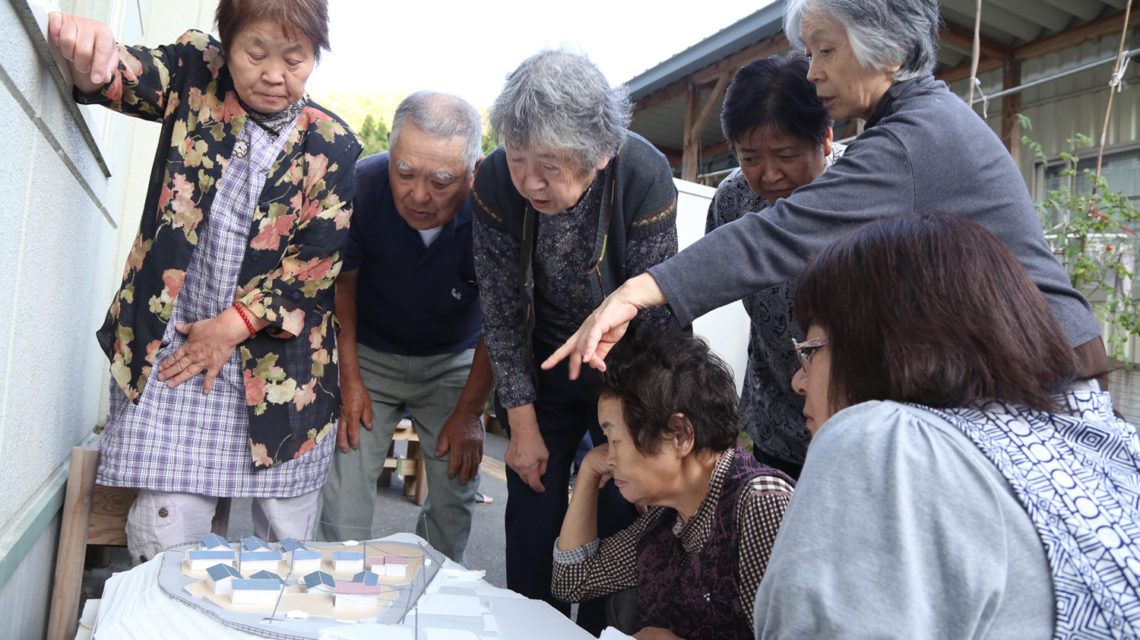 自然に囲まれた雄勝町
This is an environmental color plan related to the reconstruction of Ogatsu Town, Ishinomaki City, Miyagi Prefecture, which was severely damaged by the Great East Japan Earthquake. I was in charge of color planning for about 100 detached houses and government buildings, traditional industrial halls, commercial facilities, fire stations, etc. in 16 districts that were relocated to the hill.

Surrounded by the sea and mountains, Ogatsu has a long history, and it seems that people have been working since the Jomon period. Aiming to realize a living environment that is in harmony with nature so that the scenery of life surrounded by nature can be handed down even after the hill is moved.

Ogatsu color palette found at the workshop
Along with research, we held several workshops with residents. Initially, there were voices that looked for colorful streets as seen in overseas cities, but with each round, we confirmed the importance of digging into a landscape that seems to be a triumph. Through the workshop, it was decided that the main pillars were two: “Do not use too vivid colors that do not match the climate of Ogatsu” and “Make moderate changes so as not to feel monotonous”.

The original color palette extracted from the region, "Stone", "Oyster color" and "Pine tree" were introduced. Based on these color palettes, the exterior color of the building was determined by adjusting the location conditions and the layout plan accordingly.

Using Ogatsu stone Central part
In Ogatsu, metamorphic rock has been produced for a long time. This stone, called “Ogatsu stone”, has been processed into tiles and used throughout the villages, such as the roofs and walls of houses. In the Isehata district in the center of the town, Ogatsu stone can be used for part of the outer wall. With the desire to make visitors feel the potential of Ogatsu Stone, we are trying various ways to use Ogatsu Stone while combining the location and pattern of the stone.

Moving nature and supporting buildings
Ogatsu's nature changes continuously from season to season and is discovered every day. I created an animation in order to express the relationship between the dynamic color fascination of Ogatsu's nature and the color of the building that supports that color.