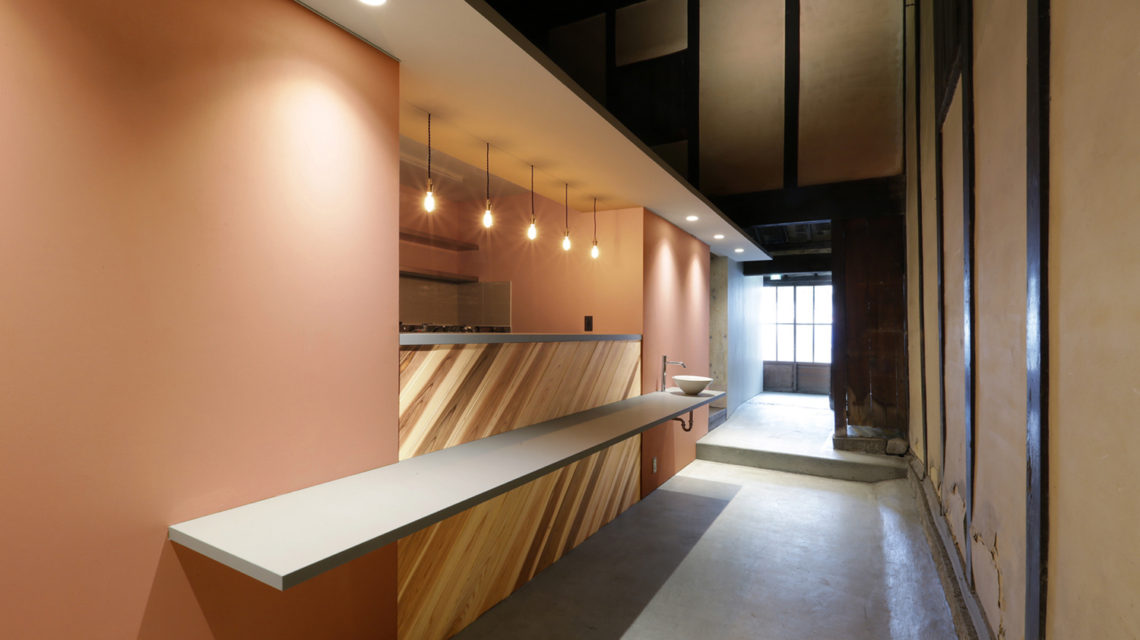 This project is for revitalizing a 150 years old house into a co-working space. The building has been vacant for 3 years. Since the house is located in the historic district called “Udatsu-no Machinami” designated by the town of Waki, Mima-city, Tokushima prefecture, we redesigned the interior of the house instead of retouching its exterior.

Concept During the research, we noticed the house, which used to be a merchant house, has an old ambience. It was also noted that the raised floor called “Mise-no Ma”, one step ahead of the doma (a dirt floor in the entrance hall) is one of the significant features of the house. Each floor is elevated step by step as you move further away from the entrance level. Thus our design concept is named “STEP” which was inspired by the different levels of each room. Through this concept we attempted to stimulate visitors to use the house for several purposes. The facility has a semi-public space, a meeting space, share desks, and a private office on the top floor.

The building’s layout allows you to travel from public to private space by ascending the floors. Since each room is connected by a walk-through path, multiple rooms will be used at the same time.

Planning We added a large kitchen space area in the previous hallway that used to be an unused storage space. Having a kitchen counter in the shaded hallway dramatically transformed the area into a “sunnier spot” where people tend to gather. The materials and colors used are based on what this building historically used to have. A house’s dark exterior color scheme keeps the look and feel of an aged house, whereas a light color scheme is used for the interior hall. To reflect the regional character, local materials were used throughout the house, e.g., locally grown cedar wood from the Tokushima pref. covers the kitchen counter and stones found along the local Yoshino River were applied into the doma. Additionally, we recycled an old Japanese zelkova frame and kept the existing stucco walls to show our respect for the building’s heritage and age.

Community Since the building faces onto a historic main street, it captured people’s attention during the renovation and neighbours were seen chatting at the doma space. We conducted a DIY workshop by volunteers at the end of the renovation. The project was finalized with painting and attaching shelves to the wall. We hope this building and co-working space unite the town and people who have different backgrounds, connecting local neighbours, enterprising tenants, the government, and migrants over time.